Auroras of the Zapatistas

Local and Global Struggles of the Fourth World War

This issue of Midnight Notes does some of the work of defining the elements of the new political chemistry of the planetary working class... What the Zapatista movement means for the U.S. anti-globalization movement is still an open question more than six years since the dawning.

The importance of the Zapatistas for Midnight Notes lies in their ability to open up a space (at great cost to themselves) wherein they are helping all of us to shape a halt to globalizing capital... Isn’t it strange that a peasant army from the poorest state of Mexico should play such an important role in the formation of a movement that can stop the headlong progress of globalizing capital? No, for we must remember that this is not the first time a »peasant revolution« (the »sickle«) has reached into the most advanced points of capitalist production (the »hammer«). One might say that the whole problem of twentieth century anti-capitalism is to be found in the enigma of the hammer and the sickle, and that the Zapatistas have tried to answer it in a new way... [t]he Zapatistas have had to remind us [that] the land is the source of tremendous revolutionary power and those who wield the sickle are often the instigators of revolutionary change − even in the stratosphere of high-tech production − because they have the power to subsist without capitalist mediation... [T]he contemporary wielders of hammers [made either of real steel, silicon chips or DNA chains] must learn a few things from the most humble of this earth... 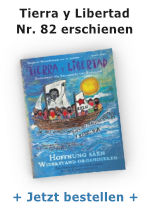